Parking in this city is tough enough. And you can add to it the uneasy feeling you get when you approach your car and recognize something is not right. I’m not talking about the towed car or forgetting where you parked the damn thing. It’s the flat tire, the broken mirror, the scratch, the scrape, the smashed window, or smashed headlight that hits you as you get closer. Congratulations, you’ve thrown craps; the ref made a lousy call; you’ve been “assessed for street repairs.” You didn’t deserve it. It was that roll of the dice again. But you will pay.
Vandalism, break ins, theft, they’re all done by garden variety criminals. But what about the broken mirror? Your so called friends tell you you should have folded it in like this wasn’t the first time you forgot to in years, but you know that you parked legally and someone drove by, hit it, caused you a couple of hundred dollars of damage and didn’t stop to report it. Didn’t leave a note. Ran for it. Would you?
It happened to me the first week they jump started Alt Side Rules back on and I’ll bet there were more than the usual number of incidences of that kind of panic and bad judgment in that week as rows upon rows of cars had to dig in, spin out, rock back and forth between two other struggling cars, or 4-wheel out of the way of non existent plows and sweepers. Only this guy backed into the side rear of my car scraping the paint down to the metal and tearing off a piece of the rear lens (never a cheap item anymore). He also tore off part of the rubber compound on the bumper. It was no tap. The alarm had to go off.
Now we all know the law. You damage a car in any way and you have to report it. You’re in a hurry, leave a note. Leaving the scene of an accident is serious. Insurance could be lost, licenses revoked. But many people who have no intention of breaking the law have decided that the everyday bump and grind of parking is a normal consequence of life in the big city. Bumpers get scraped. That plastic mermaid license plate holder that crushed when you backed into it or the trailer hitch that you didn’t see when you pulled into the space and cracked your headlight are all part of the normal “wear and tear” of this parking life. And I don’t even want to count the number of yellow dings my cars have accumulated over the years.
But this guy had to go pretty far off course to double-park back into my car that was protected behind and in front by much wider vans, had to be extra stupid. But not dumb enough to leave a note. And no witnesses came forward either. They were deaf and dumb.
A true believer of the latest CSI techniques, I walked down the block and inspected the sides of all the cars on the block and right away I noticed several cars that had other cars’ paint on them. Fact is the first 4 cars I looked at did. On the whole block an average of 4 out of 5 cars did. They’d all been hit. Hell with it. This was just typical wear and tear after all. It was just that roll of the dice.
Then I found it. I found the culprit (See photo). It has my shade of paint on it, at the right part of his car, and at the right height to have done the damage. Sure I’d have to hire a forensic chemist to prove it and that would cost more than repairs, but maybe it’s worth it to bust him. Or should I just ask him, confront him maybe, accuse him! Wreak midnight revenge? What would you do? 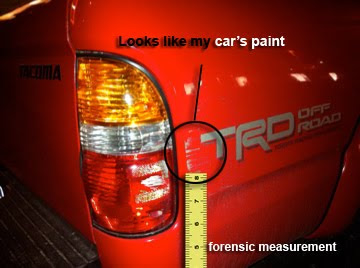