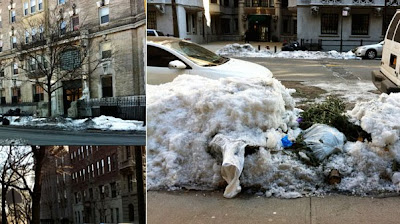 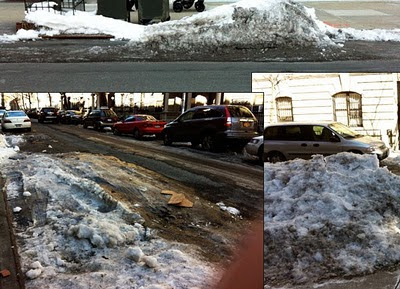 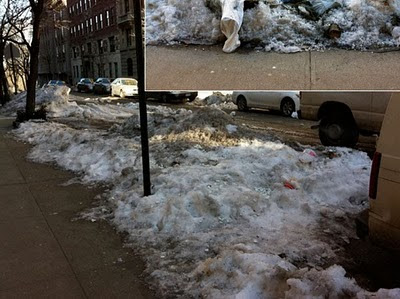 Here is a fair sample of street conditions in the Upper West Side last week. No plowing; No sweeping; (They still haven't picked up the Christmas trees.); just a whopping 9,900 (plus) tickets written on Mon. At an average of $55.00 per ticket, that's about half a mil in one day.
I actually saw a plow driving past the streets pictured here. Plow raised up like a lady who didn't want to get her hem dirty. Come to think of it, ice that hard would probably damage them.

Now, is this record or near-record windfall of Alt Side tickets because us battle hardened, streetwise, street parking New Yorkers
1) couldn’t get the car out of the ice and snow
2) could see there would be no sweeping or plowing, and, believing that it was for these sanitation dept purposes that Alt Side was created, assumed it would be suspended
3) just decided to pay the fine to help out the city that has done so much for us.

It seems very possible it’s such a big windfall because people take the law at face value. That the city actually profits handsomely from the deception. (See previous post.)
Posted by TomH at 6:26 AM