Alt Side Reform Still a Mystery?

Last year, Mayor DiBlasio instituted an "Alternate Side Parking Reform." What this reform meant was explained in a press conference where the Reform was defined as applying to "side streets."

The Dept. of Sanitation (DSNY), which is the real maker of the Street Sweeping rules, made its own announcement. The DSNY posting stated the Reform applies to "residential streets."

It should be no surprise that the elaborate and complex parking rules of New York City can not be easily modifed by a few carefully worded paragraphs. I had questions. I submitted multiple queries to the DSNY, but their replies have only sent me to the same links or reiterated those same links that raised my first questions.

This is query EC-00296950 that the DSNY web site now says never existed in a time that never was:

I am looking for clarification of the Alt Side Reform announced by the Mayor and on your DSNY site.

In the NYCDOT announcement (and in the Mayor’s press release), we are told “On days when ASP is in effect, residential "side streets" without meters will not be cleaned more than once a week on each side.”

Please see the attached image from the NYC Zoning and Land Use Map for a definition of Commercial and Residential areas. 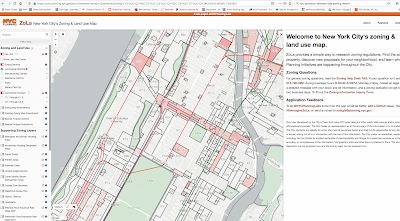 There are many Avenue blocks that are “residential” and “side streets” that appear to be “commercial” that have ASP rules.

(2A) Does the Alt Side Reform apply here? (2B) How are we to tell what is a “commercial” and what is a “residential” block (or street)?

(2C) How does the Dept of Sanitation (and Ticket Agents) tell what is a “commercial” and what is a “residential” block (or street)?

We know Parking and Alternate Side Rules extend for the block unless contradicted by other signs and/or regulations:

QUESTION 3: Your FAQ says “Non-metered streets that have multiple ASP days will be cleaned” (3) Does the “Reform” apply to the entire block if there are a just a few meters on one end or does it ONLY apply to the area of the block with meters? Another way of asking this is when you refer to “streets” do you consider each block as a unit or do you look at any smaller “metered areas” as separate?

QUESTION 4: How will it be announced if the city decides to revert to the physical signs posted and not to this “Reform?”

Thank you for taking the time to address these specific questions. Your answers will benefit our users and readers.

This EC-00296950 query has not been responded to and according to the DSNY site does not exist in their records.

The problem is when you or I try to interpret these relaxed rules, we cannot always be sure a Ticket Agent will see it the same way. Then it's pay the fine (and tow) or face the implacable NYCDOT  judges.

I believe we need a better explanation.