New Snow Record! Car Not Moved on Manhattan Street for 44 days and Survived!

Who doesn’t admire a record, a winning streak, a hero? This Winter, in perhaps one of mankind's greatest achievements, two fellow New Yorkers have left his and her car on the south side of the street in the Upper West Side for over 6 weeks and never received a ticket! Thanks to the repeated snow days, frigid days, and one singular, extraordinary, eureka moment of sheer will (or luck), this happy couple, who only use their car for weekend excursions, have been living the dream. Mother Nature and the benevolence of the DOT (uh yeah!) have dealt this carefree couple an Alternate Side Parking leave of absence.
This daring feat got its real momentum with the big Nor'easter on 2/6. Nobody was moving their cars in those days and Sanitation crews were plowing day and night. Alternate Side suspensions ran for days and as much as a week at a time. Then as things started to clear and there was a day or two when Alt Side was in effect, Christine (as the car is now known in Hollywood circles), happened to be on the correct side for that day’s sweeping which, of course, never happened because February’s record cold temperatures froze the snow solid. Then came more storms and more frigid days making the accumulations rock hard and the suspensions inevitable.
Then one amazing day in mid-February, the DOT looked up into the blue sky and, in their infinite wisdom, decided Alt Side rules should be in effect. No matter, those snowplowed snow dunes were frozen fast to the street and too solid to plow. Our heros' doorman confirms that a plow didn’t even show up to try. A sweeper didn’t show to try to slalom up and down them either.  It had been decided it was time to get those cars (tickets?) moving again and people started dutifully digging, hacking and dynamiting their cars out. Our two heros’ car was so covered in snow and so encased in ice, 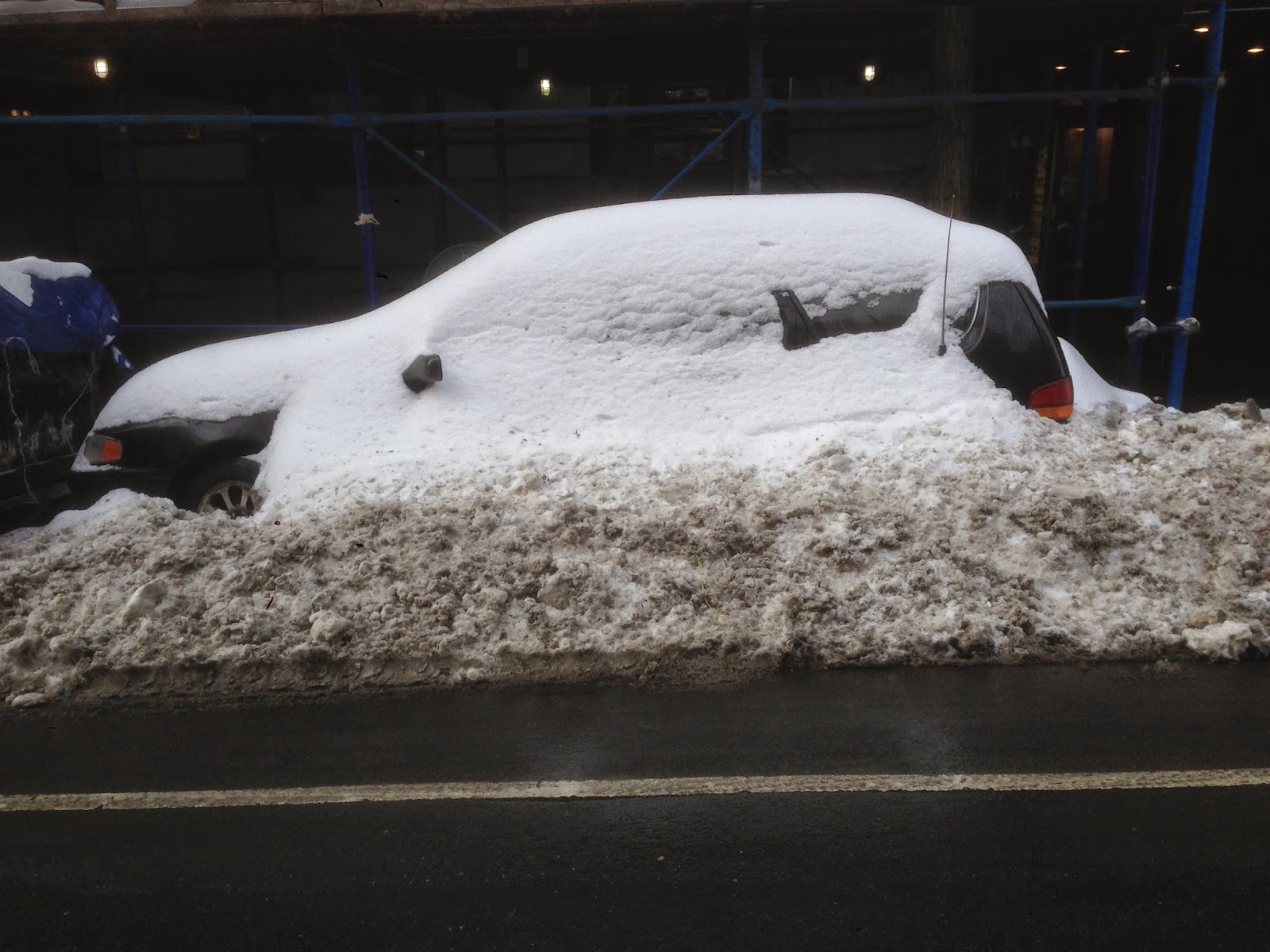 they decided they wouldn’t be able to get it out and left it. "Let the DOT have their pound of flesh!" or other similar curses were uttered.
Later that morning, the parking troopers relentlessly marched down the street, waved their magic revenue wands over windshields and printed their tickets as if it was a lovely spring day. Miracle of miracles though, our two heros did not get a ticket.
How were the ticketed and unticketed cars chosen? Who knows? Is it fair? Who can say? Is our new mayor afraid of heart attacks? Probably. Does the DOT even have a heart? Just maybe, But thanks to that one fateful day in mid February the all time record string of over 6 weeks without having to move your car on a Manhattan street continued and only just ended today.