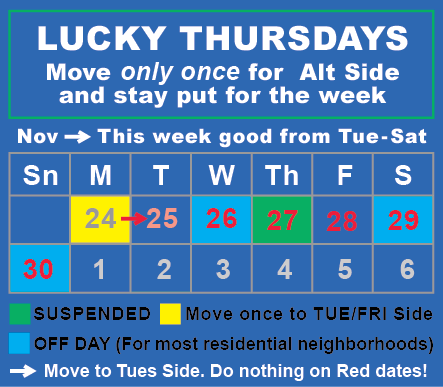 This Thanksgiving Alternate Side Parking is suspended for one-day-only.  Now everyone knows Thursdays are lucky days, but do you know why? Is it because the weekend is almost here? Is it because it was named after the planet Jupiter, the King of the Gods? Even more impressive than these, it’s because Thursdays that are one-day-only Alternate Side Parking Suspended Days have the longest stretch of days possible without the required moving of your car. I know those of you who have to take your car out every day wince when you hear from us who only take the car out for recreation or for transporting in-laws out of town, but we also pay New York City’s higher registration fees, taxes, inspection and insurance, not to mention suffer the whims of the DOT, the PVB, up the WXYZ. So we have to give thanks when Monday we can move the car to the Tue/Fri side and not think about moving it again until next Mon.
Now some may say “OK, sounds lucky,” but what is the 5-3-5-4 in the title? The combination to your gym locker that you keep forgetting, the latest college football genius defense on show this Thanksgiving weekend, or the rest of that girl’s telephone number that rubbed off? None of these.
It is the results of the parallelspaces.com very sophisticated, very state of the art Best Alternate Side Suspended Days Test Formula Numbers Array! Hey, we take parking pretty seriously. Of course, it’s a little too complicated for those of you without an engineering degree, but I can explain it to you laymen (and laywomen) something like this.
Start with the Mon, Tue, Thur., or Fri (Typical Alternate Side Days) just previous to the single suspended day you want to test. Then count the days until your car will no longer be legally parked. For example, this Thursday Street Sweeping is suspended for Thanksgiving. So once you move the car to the Tue side, you don’t have to move it for Wed (1), Thur (2), Fri (3), Sat (4) and Sun (5). That rates a Thur Only Suspended Day as a 5. Tue Only Suspended Days are a 3 and Fridays a 4. While it’s true Mondays are also a 5, the tiebreaker is long weekends almost always involve taking the car somewhere. True, just about all of us will take the car somewhere for Thanksgiving, but think last Veterans Day (11/11) and you get my point.
So Thursdays are officially crowned King of the Alternate Side Suspended Days and we thank the King of the Gods for it!
But that’s for single days. What about Alternate Side Suspended combinations? Well if you've been watching you just saw a 16 day stretch in October. Not too shabby.
Posted by TomH at 5:01 PM