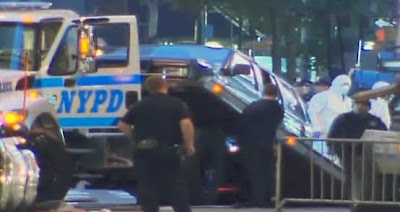 By now everyone has heard about the alleged attempted car bomb in Times Square. No matter how often you see it, it is always a sad and sobering sight when yet another car is hauled away in this city, but this time I was a lot sadder and a lot happier that a car was being towed. This time the city's always alert, always vigilant, vast mechanized army of tow trucks actually seems heroic and has finally found a car deserving of a tow and a parking violation worth fighting. As the image below of our Parking Map clearly indicates, that SUV was illegally parked(!) and they are just dumb out of luck. The NYPD has their car and my guess is will have their man soon enough.
Now it's the terrorists' turn to suffer. Their vehicle is in the possession of the NYPD and anyone who has been caught in that tractor beam knows what that is like. Let them try to get it back. If the original terrorist attack on the World Trade Center is a fair measure of their stupidity, the NYPD will just have to wait for the wannabe terrorist to claim his or her vehicle. It's either that or else suffer the insult of seeing his or her SUV go to auction, be forced to see his/her SUV purchased for a fraction of what he/she paid for it (but still contribute to the city's finances), maybe one day even have to witness it being driven around by a happy all American family of 3.
Fortunately, this truly scary terrorist attempt is beginning to look like a pretty amateur operation. It didn't go off. The SUV started smoking before the fireworks and even I know that is just bad manners. The whole thing was expertly defused, the surrounding area efficiently secured and evacuated. And you have to hand it to all the city employees who participated in making this a non event. You know the memory of those brave firemen who went back into the World Trade Tower was on all their minds at least for a moment, but they carried out their emergency measures to the letter and we are all feeling a lot safer thanks to them.
I know some of you are wondering if Mayor Bloomberg was in Bermuda when all of this went down (see previous post). My guess is that NY Times article inspired that pointed, awkward reference, in his early morning speech, to having been in Washington DC earlier. That would explain the Tux. Looks like he's off the hook on that one which is more than I can say for that SUV.